Tucked away in an old courtyard, the centuries-old casa del corregidor (the mayor’s house) now serves as a little courtyard housing some of Puno’s socially-minded businesses.

A couple of travel agents and a fantastic cafe can be reached via the peaceful courtyard.

But tucked to the right of the main entrance was the surprising find, k’antu. It was, as the sign proudly displays, a fair trade shop.

K’antu is a retail part of the organisation CIAP (Central Interregional de Artisanos) that for more than 20 years has tried to assist the more vulnerable people (women in particular) in various parts of Peru, particularly around Puno and Lima, the capital. Individual members of CIAP are organised into associations that typically comprise around 15-20 members. Nearly three-quarters of CIAP members are female. In the Puno region there are about eight different associations.

William Flores is the manager at k’antu and when he wasn’t chatting to one of his local artisan members, he gave me an insight into k’antu’s origins.

Puno is a relatively poor region. The idea of the k’antu shop was to try to take advantage of the tourism in the area and create a space to sell the products made by local artisans.

It’s membership of the World Fair Trade Organisation (WFTO) ensures that all the producers are paid a fair price for the products they create.

Using local materials, the biggest sellers here are clothing (made from alpaca and llama wool), jewellery and handicrafts. Each product carries a WFTO label, the name of the artisan who made it and the association name they belong to. In our virtually-connected world it felt more appropriate that I was able to connect to a real person by buying an item from k’antu and supporting fairly the livelihoods of people who’ve lived here for generations.

And what better way to finish up a hard afternoon’s shopping than with a cup of local fair trade coffee sat outside in the sunshine.

While in Puno I took the chance to do some sightseeing for a day. And the main attraction is on the lake itself, Lake Titicaca.

It is one of the most famous local attractions for tourists – a visit to the see the Uru people (los uros) who inhabit a multitude of floating islands just a few kilometres by boat from Puno. It is certainly another world. The indigenous people here pre-date the Incas, living on islands of reeds they made themselves. Even today they still make their homes and their boats from the reeds.

Tourism helps to keep these communities going, but much of it felt staged. From the welcoming sing-a-long to the information talk and the hard-sell of the local crafts I hoped the communities maintained their sense of identity, and not just a tourist facsimile. When the tourists aren’t around, the people here still have to maintain their way of life. 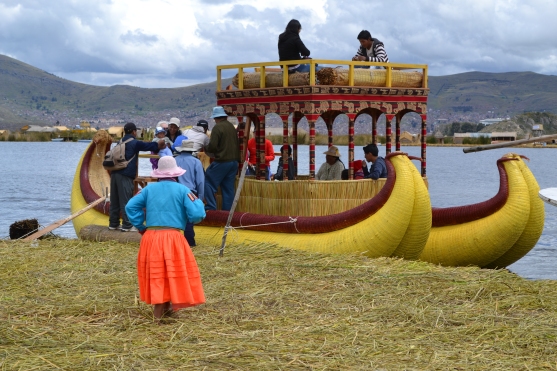 An inhabitant of the islands greets arriving tourists

Reeds are used in construction; nature eventually takes over and buildings can start to sink back into the water 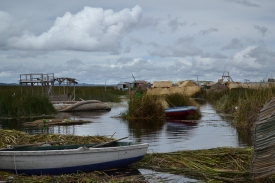 A typical part of the Uros community 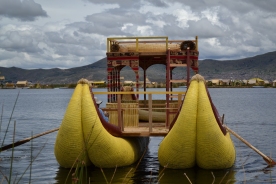 A striking locally-made boat. Tourists are taken around many of the different islands

Away from the tourists life goes on as usual

Locals build their own boats 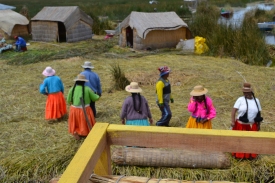 The slightly larger islands can support a few families 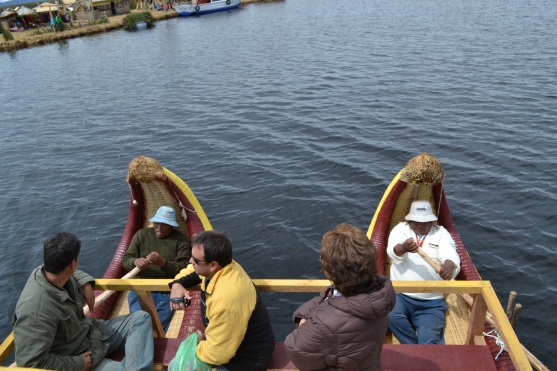 Local men row the reed boats for the tourists 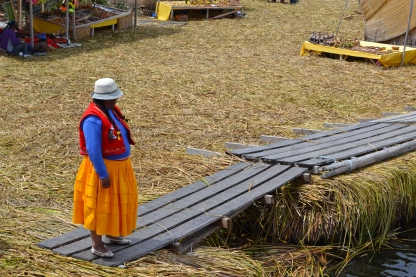 Sometimes assistance is required to navigate gaps in the floor 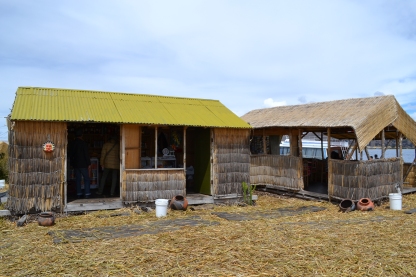 A typical Uros dwelling – predominantly reeds and a simple roof

As well as a visit to Los Uros, Puno has a few other attractions, including a ship built in the 19th century (MN Yavari) that took six years to be hauled up over the Andes from the coast and then reassembled on the lake. As well as checking its seaworthiness I climbed up the local hill overlooking Puno (Condor hill) and later relaxed in a fine cafe with a cup of local fair trade coffee.

Getting through Peru in a short time-frame required some long, gruelling bus rides. Travelling south from Trujillo, I made a quick stopover in Lima before heading south-east where my destination was Lake Titicaca and the Peruvian altiplano, where I wanted to sample something a little different. A brief visit to the shores of Lake Titicaca, more than 3,000 m above sea level, was a place I’d long been intrigued by. It felt like a good place to round things off. With its claim of housing a ship that took 6+ years to make the journey there from sea level made it unconventional to say the least. Not much coffee grows at this altitude but there was an office of a coffee co-operative and also the area was renowned for its artisan and local crafts. Plus a little cool-down from the desert heat was welcome.

Lake Titicaca straddles the border of Peru and Bolivia. Indigenous communities are prevalent throughout the region on both sides of the border. This includes communities who live on Lake Titicaca itself, on floating beds of reeds. The Uros people pre-date Inca civilization. The floating islands are continuously managed by adding more reeds as ones underneath rot away naturally, so the size of each one can change easily. They are a popular tourist draw with regular boat trips from Puno.

The fair trade coffee co-op (CECOVASA) was located in the neighbouring town, Juliaca. Not a logical location for such a co-operative, but my curiosity was piqued enough to try to find out the reason why it was located so high up here on the altiplano. I knew that CECOVASA wouldn’t have any coffee farmers nearby, but I took the 30-minute bus ride from Puno, passing isolated houses and quinoa plots as we trundled across the windswept plain.

Set back from the main road and just outside the town centre, CECOVASA looked drab and dispiriting from the outside. Even a mural on the wall of the various fair trade co-op members within CECOVASA did little to brighten things up, though at least I knew I was in the right place.

As usual I had turned up unannounced and so had no idea what I’d actually get to see, but Jaime, the manager, was on hand to show me around. At least for a little while…I think he soon got bored of that and later left me to my own devices.

The CECOVASA story was somewhat familiar. As with many other coffee co-ops I’d visited, a historic price collapse of coffee (around 2001-02, which had devastated coffee farmers worldwide and led many to simply abandon their farms) subsequently led to an interest and setting up as a fair trade co-op. The co-op collective had started in 1970 with five separate smaller co-ops. Since 2003 it was fair trade and had grown to eight co-ops (10 now) comprising more than 5,000 producers. The Juliaca part of their story was more recent, and looked to be ongoing, given the state of the facility I was visiting.

Inside the facility. To be developed? 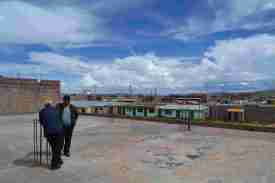 Catching up on the ‘roof’ 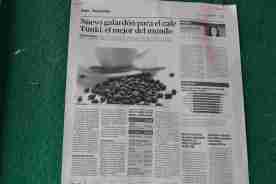 It wins awards, you know 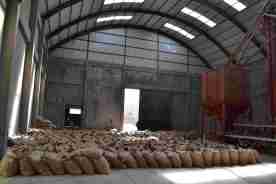 Bags in the warehouse ready to go 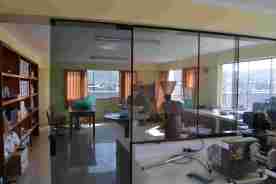 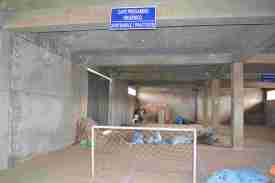 Why not improvise with a football pitch? 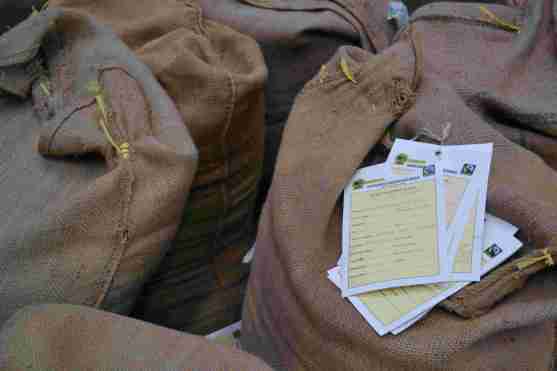 One of the staff, working hard…

Not much attention paid to the interior

A bright mural on the outside 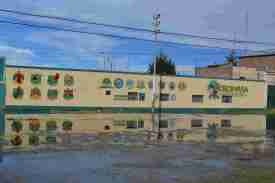 Each co-op has its symbol on the exterior wall

It’s a welcoming but misleading sight

More artistry on the exterior wall

This office and warehouse, opened in 2010, was an attempt to get a little closer to the farmers. Although we were more than 3,000 metres up on the plain, we were a lot closer to the producers than before, when these facilities were in Lima. But even today the farmers would pick, wash and bag their coffee at their farms before bringing to Juliaca. Most of the coffee is exported but some high quality coffee is roasted and packaged here for the domestic market. It is this coffee (Tunki) that wins awards – an unusual scenario in fair trade coffee when most of the higher quality is exported abroad.

I was shown around by Jaime, the general manager. But I was often distracted by his big, bushy hair and capped, rabbit-like front teeth. His dishevelled appearance was a reflection of the co-op itself – a mish-mash of progress and neglect. It was hard to tell if construction had stopped midway through or if it was just slow progress. Despite the new cupping lab and warehouse, many other areas were showing signs of wear and tear, paint flaking off the concrete facades. Perhaps it came down to costs; Jaime was worried about new fair trade certifications. He felt they were needed but the costs added up.

I left with mixed feelings. Many of my fair trade visits left me wondering just much good fair trade was doing. CECOVASA encompassed everything for me, both the positive and negative. I hoped they would succeed but it was difficult to say. I took a bus back to Puno and went to a local cafe to try some award-winning Tunki coffee for myself, hoping I might find an answer.